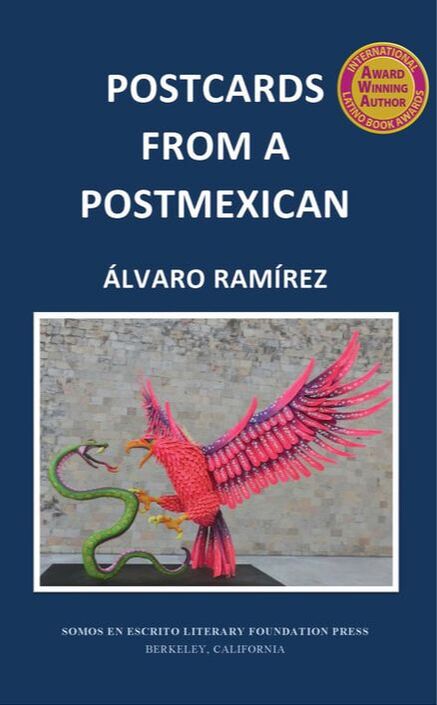 Postcards from a PostMexican peels away the façade of the nationalist, folkloric Old Mexico to reveal a country which each day looks more and more like its salsa-loving, border-sharing wall-building neighbor—the U.S.

Author Álvaro Ramírez, the self-defined PostMexican in the title, chronicles the amazing cultural transformation that is taking place in a transnational geographical area that encompasses Mexico and the United States. Ramírez shows that the world as we knew it is disappearing or morphing into another at a dizzying pace in the new millennium, thanks to massive migrations, NAFTA, the Internet, and social media. These socio-economic and technological forces are deluding the unique cultural identities that differentiated us neatly into nations. What is emerging is a hybrid world where Americans set to a large degree the trends, the cultural models that define the inhabitants of both countries.

Interestingly, most people are unaware of the changes Mexicans are going through in the postMexican condition until they have a chance to visit either country. American tourists (especially Mexican Americans) are shocked and put off by the heavy presence of American culture (music, movies, sports, clothes, fast food) in Mexico; Mexicans are surprised at the amount of their national culture alive and doing well in the United States (food, mariachis, ballet folklórico, Cinco de Mayo, Día de los Muertos).

​After witnessing and studying these phenomena for many years, presenting papers at conferences, and teaching many courses on the subject, Ramírez decided to start a blog where he could rant and rave on these matters in a non-academic style, free of jargon, accessible to all readers. In Postcards from a PostMexican, he offers short, lucid analyses of the transnational world in which he lives. The twilight of Mexican nationalism, the relation of Mexico and its migrants, the rise of the NAFTA Generation, Mexican racism and xenophobia, the populism of Donald Trump and Andrés Manuel López Obrador, are but a few of the issues that Ramírez addresses with flair and a good dose of humor, which leaves the reader with an understanding that Mexicanness is not what it used to be.