SOMOS EN ESCRITO
​Armando Rendón was born in 1939, literally in the Westside barrio of San Antonio, Texas, in his grandparents’ home at 1034 Ruiz Street—two midwives attended his arrival— where he lived until the age of 10. He then moved to Oakland, California, graduating from St. Mary's College in Moraga, California, in 1961. Shortly after graduation he married Helen Zoma of Baghdad, Iraq, and they moved to Sacramento where his first job was on a weekly newspaper as a reporter. In 1957, he was recruited by the U.S. Commission on Civil Rights to work in its D.C. press office. After three years with the Commission, he left to write the Chicano Manifesto under contract with the Macmillan Company. The book was released in 1971, the first written about the Chicano Movement and by a Chicano writer. After a stint in public relations, he accepted a position with American University as director of a program called Latino Institute, a program designed to recruit and retain Latino and Latina young adults living in the nation’s Capital. During this time, Rendón was appointed to the inaugural Board of Trustees of the newly created University of the District of Columbia where he served for three years. In 1979, he was recruited by the U.S. Census Bureau to its Census Promotion Office as lead person in getting the Hispanic population to answer the 2080 Census. In 1983, he earned the Juris Doctor at A.U.’s College of Law and worked pro bono with American Indian and Chicano human rights organizations through the 1990s. In 1988, he returned to the Bay Area and served in the public affairs office of the California Public Utilities Commission until retirement in 2003. Shortly after returning to the Bay Area, he had accepted a faculty position in the Collegiate Seminar Program at his alma mater. Then in 2010, he turned to writing with his focus on young adult novels. In 2013, he published the first in what became an award-winning four-part series titled The Adventures of Noldo and His Magical Scooter. His fifth Noldo book, Wizard of the Blue Hole was also a finalist in the 2018 International Latino Book Awards. In 2009, Rendón founded Somos en escrito Magazine and in 2016 he established the Somos en escrito Literary Foundation which now operates the Magazine and the Somos en escrito Literary Foundation Press. In 2019, Rendón released a paper titled “Blueprint for the Next 50 Years,” which became the basis for the creation of
MeXicanos 2070, a national organization dedicated to preserving and advancing Mexican American culture. 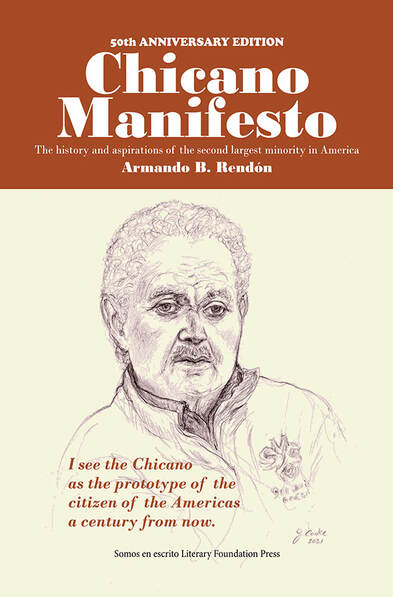